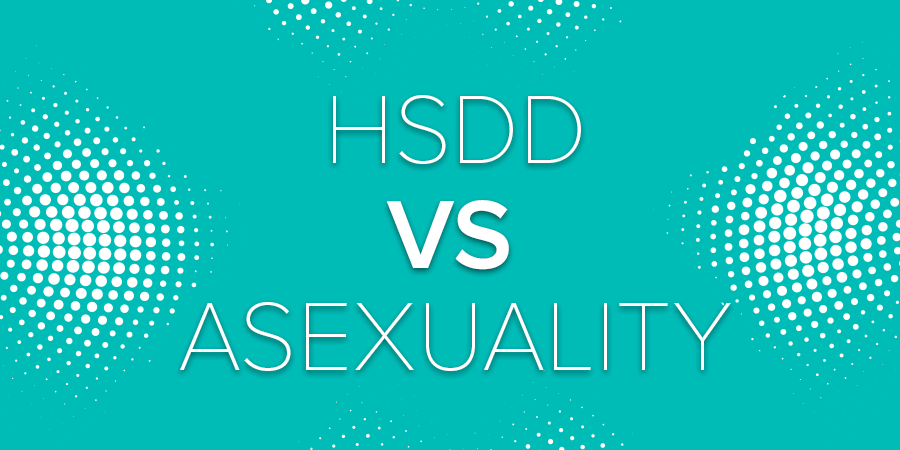 It’s time to clear up a common misconception: Hypo-active Sexual Desire Disorder (HSDD) and asexuality are NOT the same. While both HSDD and asexuality involve a lack of sexual desire, HSDD is a treatable medical condition while asexuality is a sexual orientation. Here’s what it comes down to: HSDD is a lack of sexual desire that is distressing to the person experiencing it. Being asexual does not imply that your lack of desire is harmful to your health or happiness. Let’s dig a bit deeper.

The Asexual Visibility & Education Network defines asexuality as not experiencing “sexual attraction or an intrinsic desire to have sexual relationships (or the adjective describing a person as such).” Asexuality can be experienced differently from individual to individual– it is not a one size fits all sexual orientation. Asexuality does not exclude you from forming romantic connections or having any sexual experiences. An asexual may choose to partake in sexual acts privately or with a partner for a variety of reasons– those reasons just are not the same as they are for sexual people.

The American Sexual Health Association defines HSDD as “the absence of sexual fantasies and thoughts, and/or desire for or receptivity to, sexual activity that causes the person distress or difficulties in her relationship.” The key aspect of an HSDD diagnosis is the associated distress surrounding a woman’s lack of sexual desire. Women suffering from HSDD want to have sexual desire, likely had it in the past, and are upset by its absence.

HSDD and asexuality may appear to have similar symptoms at first glance, but have very different impacts on a person’s life. Asexuality is not a problem and people who are asexual can live happy, full lives without having sexual desire. Women with Hypo-Active Sexual Desire Disorder are suffering from their lack of desire and are prevented from achieving the satisfying, balanced lives they seek.